The American Holly is considered one of the most popular trees in the world. Due to extensive cultivation of the American Holly by nurseryman and gardeners alike, there are currently over 1000 different cultivars, with more being patented every year (Holly Society of America). The tree is ridiculously tough. The American Holly is widely known as the hardiest broadleaf evergreen. Native specimens found throughout the Appalachian Mountains have been found to withstand temperatures of -10°F, while cultivated varieties have been naturalized in Ohio down to -20°F. The tree is also not picky in terms of soil requirements. American Holly will grow in nearly all soils. This fact is evident given that its native range extends from Massachusetts to Florida to Texas. American Hollies grow on mountain tops, in river valleys, on flood plains, and along coastlines. This range of habitats and conditions means the American Holly does not take great risks in its habit of growth. The tree has a slow to medium growth rate. The tree also reproduces the "old fashioned way;" male and female flowers are produced on separate plants (dioecious reproduction). A male pollinator must be nearby in order to produce the beautiful red berries we are all familiar with on female trees. Throughout history, the appeal of bright red berries and lusterous evergreen leaves drove the popularity of the English Holly. From the Roman and Druid winter solstice traditions to the eventual European Christian traditions, the symbolism and colorful nature of the evergreen holly in the dead of winter was constant. It is little wonder that when the European colonists landed in the New World, they brought their love of holly among their many traditions. Prior to their arrival, American Holly leaves had been used by Native Americans to make tea to treat cough, and berries had been used to make buttons. But Europeans brought demand for American Holly to a whole new level. They recognized American holly as an obvious substitute for their English holly (Ilex aquifolium) holiday traditions, and decorative and landscape usage soon exploded. Today the popularity of the American Holly is as strong as ever.

According to Michael A. Dirr's Manual of Woody Landscape Plants ...

* Michael A. Dirr contends that the Croonenburg holly is a monoecious American holly cultivar. This description is nebulous when compared to an account from Mr. Samuel H. Thrasher of Greenbrier Farms - the nursery who purchased the original tree and ultimately introduced it in 1934. According to Mr. Thrasher, the Croonenberg family of Lynnhaven Bay, Virginia maintained that the tree was a hybrid American-English holly. According to the family, the tree had grown in the family garden and was monoecious, bearing flowers in the ratio of 10 female to 1 male.

Cultivated holly varieties will often be marketed with their gender equivalent tree. By their nature, cultivated varieties (cultivars) are genetically distinct plants selected for a particular trait or combination of reliable characteristics. This means that while the female and male plants may share a common genetic heritage (i.e. the same parent trees), each plant is distinctly and fundamentally different from one another. Pollination is not dependent on having the marketed counterpart, and any male that flowers at roughly the same time as the female holly will act as a berry pollinator with few exceptions. The Nellie R. Stevens & Edward J. Stevens hollies are an excellent example of this concept. The Edward J. Stevens holly is often marketed as the male companion cultivar to the Nellie R. Stevens holly; however, the two plants are distinct cultivars - i.e. the Edward J. Stevens is not simply a male clone of the female Nellie R. Stevens. Like many male companion cultivars, the Edward J. Stevens was simply found among the same planted seedlings as its female counterpart. Examples of this practice are numerous, and put simply, the practice is amusing. Some other notable pairs are Jersey Princess & Jersey Knight, Emily Bruner & James Swan, Blue Princess & Blue Prince, and Blue Maid & Blue Stallion. It is important to note, not all male/female names can be taken at face value. Sometimes male and female nomenclature is deceptive. A good example of this is the variegated Highclere holly cultivars Golden King & Golden Queen. With this pair, the Golden King is actually the female cultivar.

*Spotlight cultivars have been ranked on a scale of 1-5 for top holly attributes by Boyd Nursery Company nurserymen (5 being the best). Ranked attributes include leaf color (degree of dark green), luster, berry production, and trainability of a central leader. 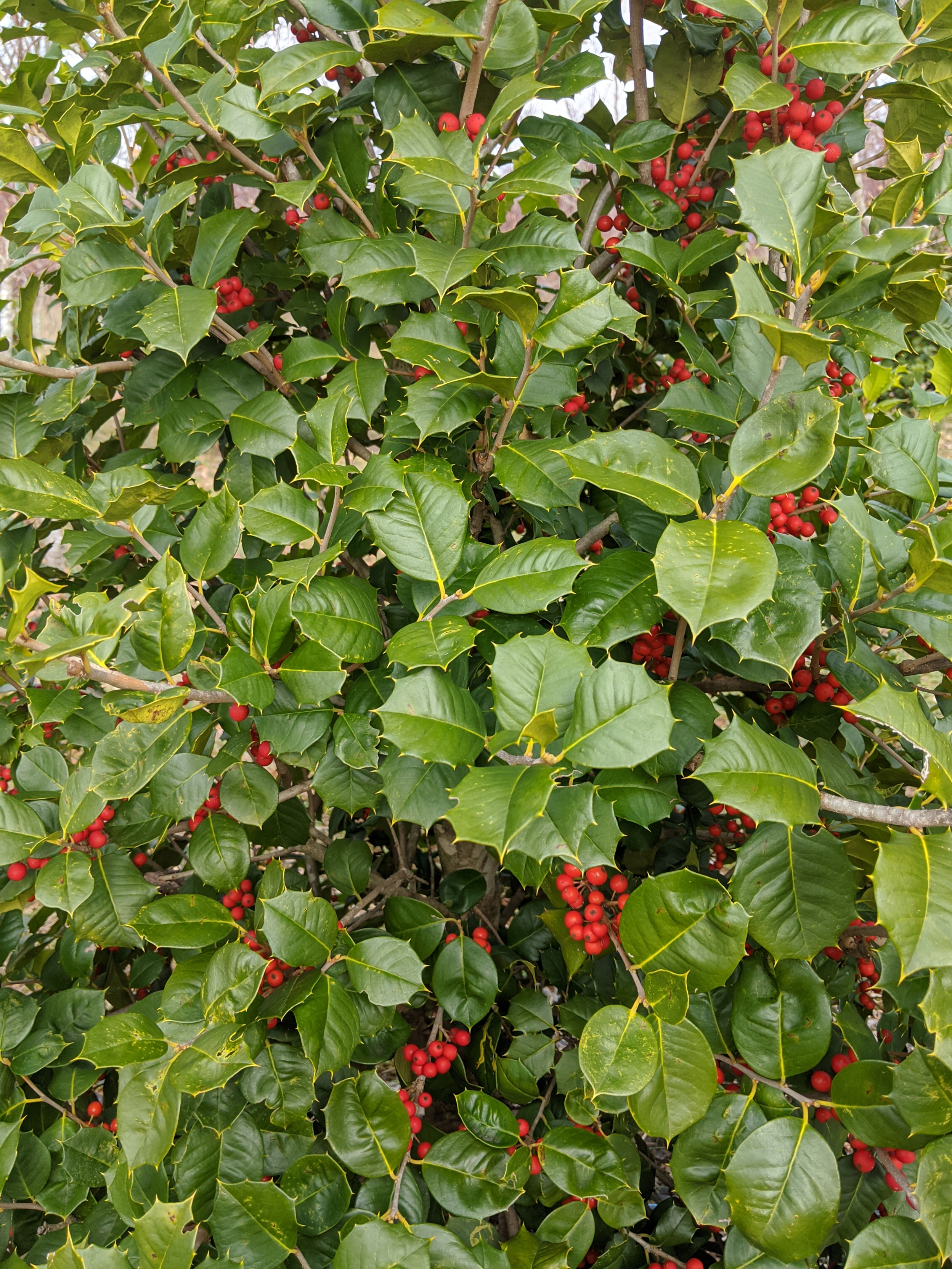 The Satyr Hill American holly is one of the top five most popular varieties of female American holly. Producing large red berries that tend to be well distributed across the tree, the Satyr Hill variety is the modern standard for landscape hollies. Voted the 2003 Holly of the Year by the Holly Society of America, the leaves have a distinctive "tortoise" shape and are typically 3” long and 2” wide. This particular cultivar was found as a volunteer seedling and developed originally at McLean Nurseries in Towson, Maryland by Stewart McLean. Registered by the Holly Society in 1970, the cultivar was named for the road on which the nursery is located - Satyr Hill. It is a vigorous grower with a compact, upright habit. The tree is remarkably easy to prune and shape. Gaps in foliage fill in faster than other top cultivars, and the central leader is less prone to damage. The tree can reach heights of 30’. Berry distribution is best by late October and retained through winter. The Satyr Hill excels when used in screens, hedges, and even as an individual specimen. 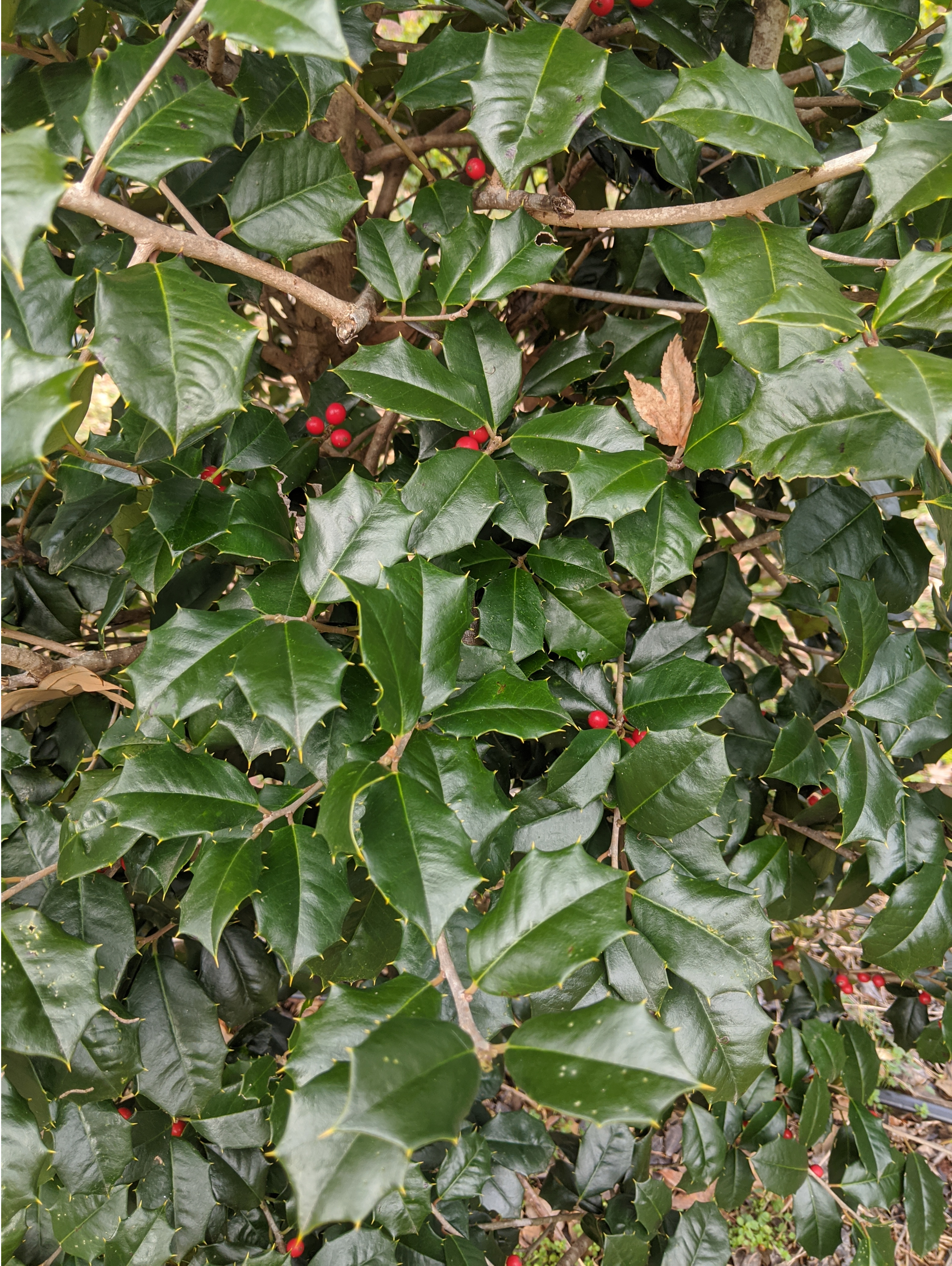 Among the hundreds of registered American holly cultivars, the Jersey Princess is true royalty. While there are several cultivars that might equal the cultivar on individual characteristics, there are very few that have achieved the level of popularity as the Jersey Princess. With great habit, heavy fruiting, and consistently-colored dark green foliage through winter, the holly was bred for its landscaping prowess. Dr. Elwin Orton of Rutgers University developed the cultivar. The holly was Orton’s first release as part of the Rutgers New Jersey Agricultural Experiment Station during the 1970s. The tree can be difficult to train into having a central leader, but if special attention is given, the tree will have a strong pyramidal form. It has arguably the most lustrous leaves of any of the top American holly cultivars. 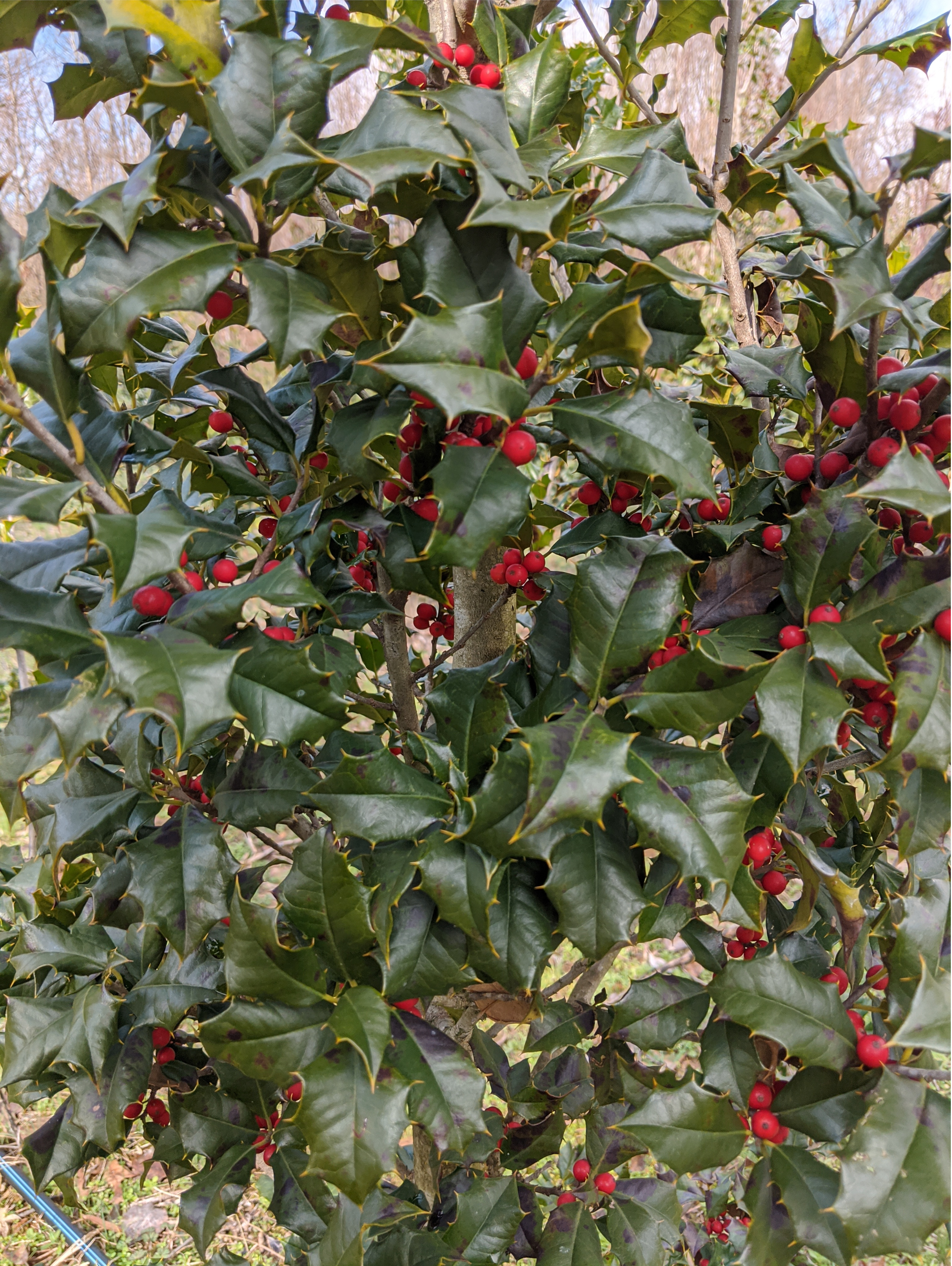 Registered by Ronald E. Solt Greenhouses of Barto, Pennsylvania in 1998, this popular holly cultivar is a prolific fruit-bearing tree and a faster grower when compared to the species. Reportedly cold-hardy to -20°F, the tree can reach heights of 20-30’ and grow 15-20' wide. When bearing fruit, Miss Courtney holly branches appear pendulous from the shear volumne of berries. The tree makes for a wonderful display in groups, but is equally stunning on its own. Its Holly Society of America registration number is 1-98. 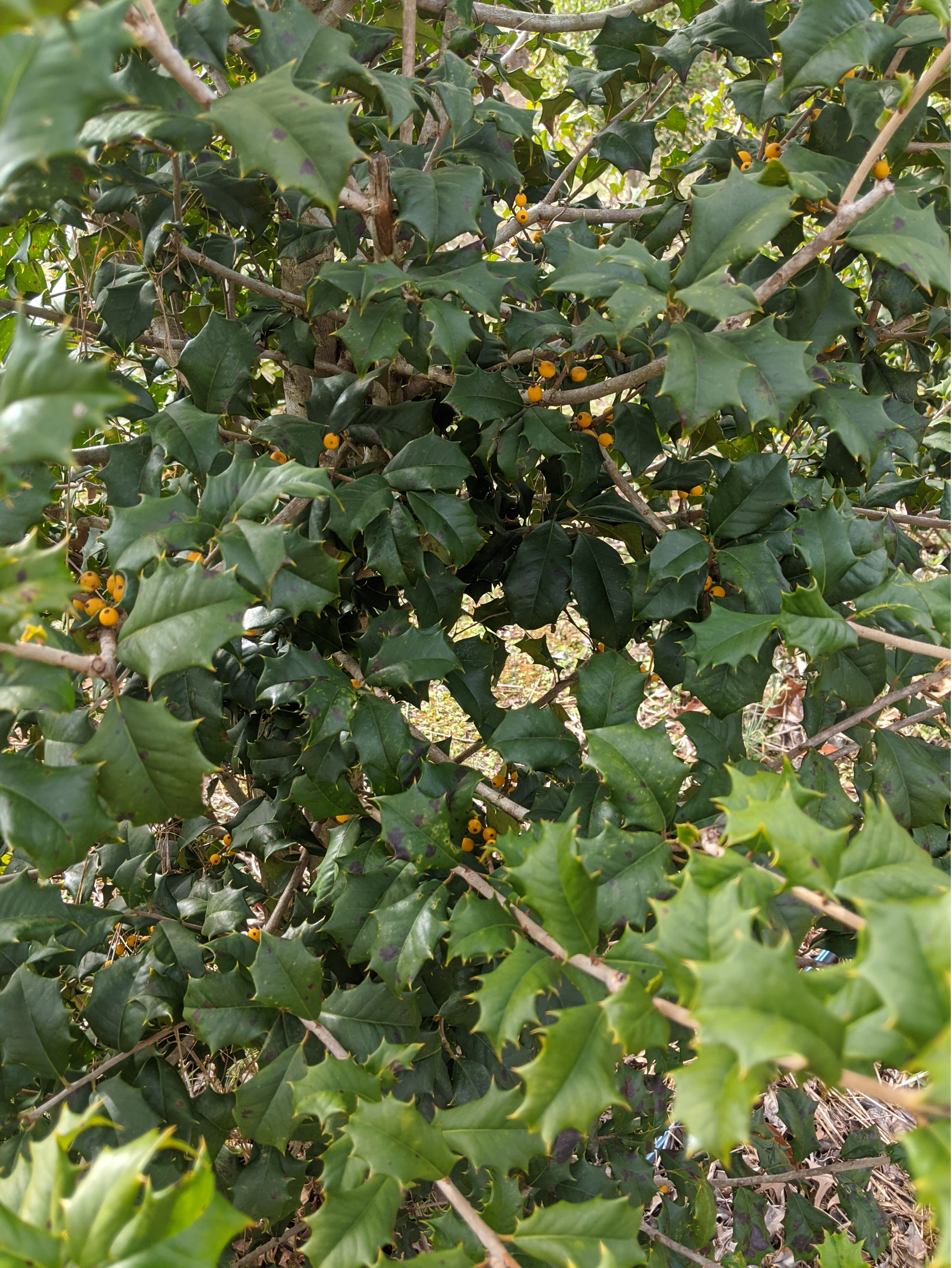 On first glance of the name, one might believe the origin of this cultivar was rooted in piracy. After all, as a yellow-berried American holly, one could make any number of gold puns involving Captain Morgan. Instead the origin of this holly is much less exciting. Discovered by J. M. Morgan and Mrs. T. A. Dar on Morgan Farm in Rowan Township, North Carolina in 1902, the holly was later introduced officially in 1959. It was registered with the Holly Society of America as number 4-61. The tree has dark green, lustrous leaves with five to ten spines. Fruit is Indian Yellow (6) (Royal Horticultural Society Colour Chart) and is borne singly. The Morgan Gold can reach heights of 25’ at maturity. 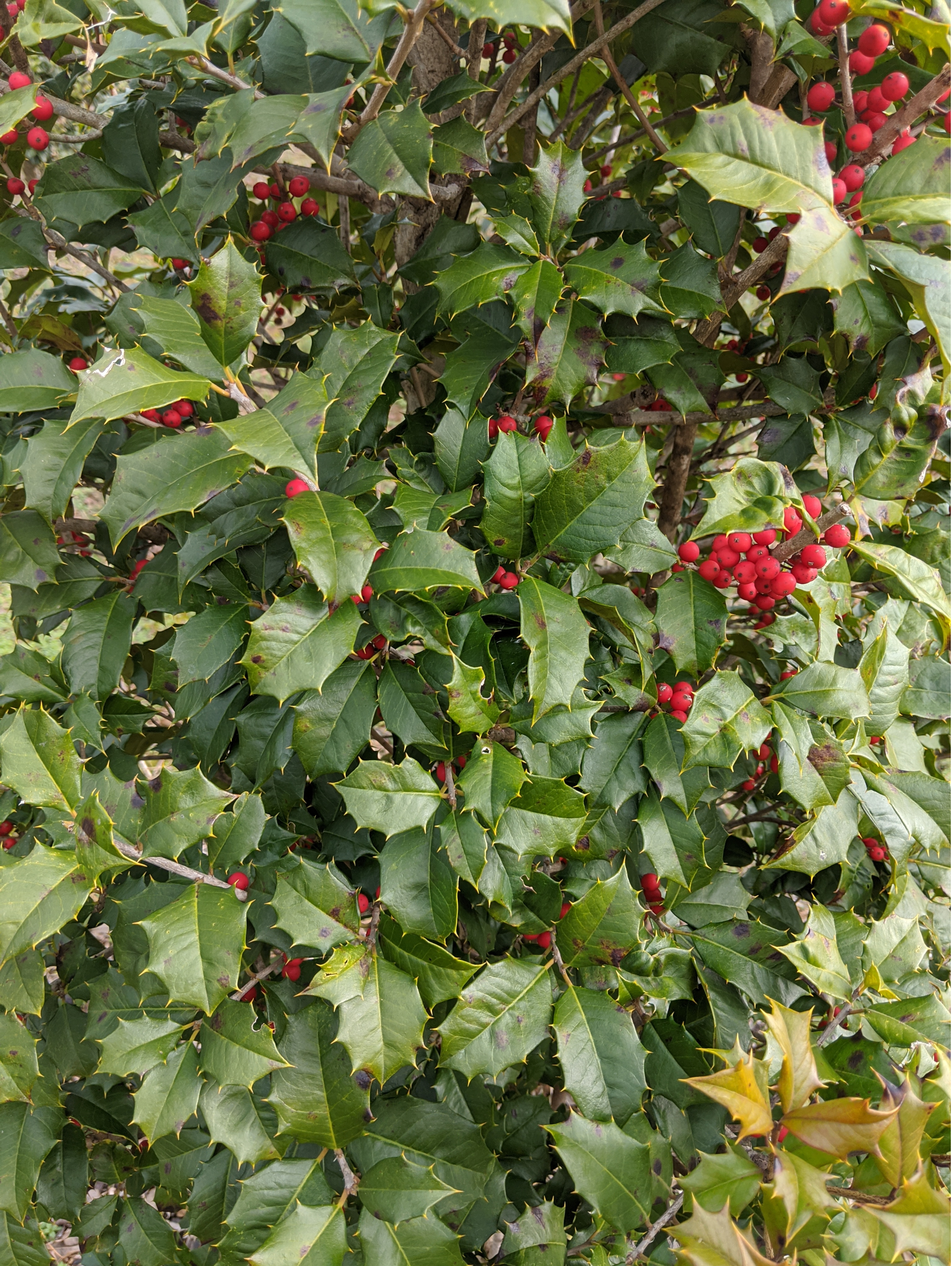 The Judy Evans holly was discovered by Theodore Klein in the Cave Hill Cemetery and Arboretum in 1940. Named after Mr. Klein’s niece, today the holly is considered one of the best of the more than 1000 American holly cultivars. The best American holly cultivars can typically be reduced down to a particular set of characteristics – the tree’s habit, the degree of leaf luster, and the profusion of berries. In these characteristics, the Judy Evans excels. The cultivar can reach heights approaching 40' at full maturity. 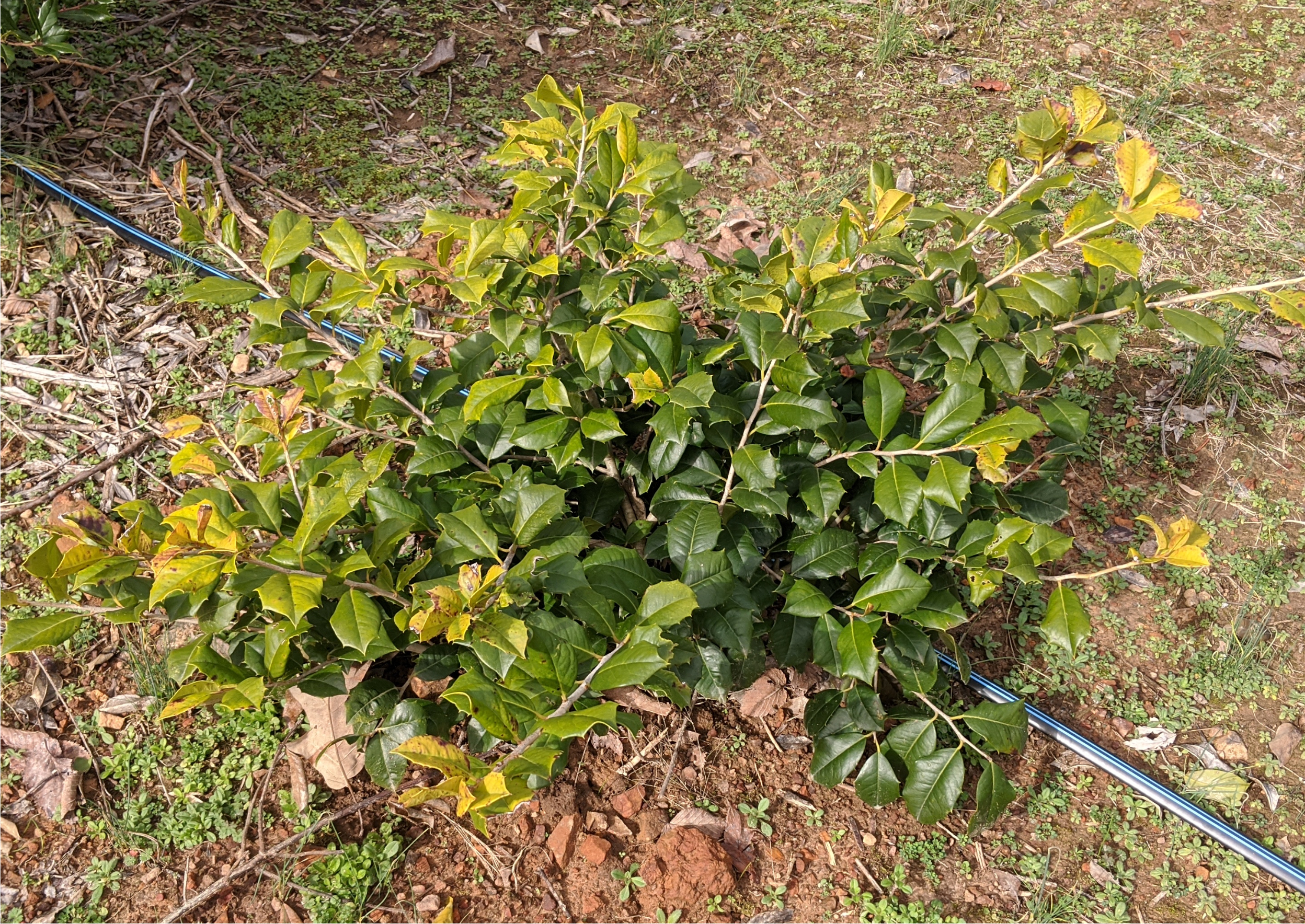 Probably the most unusual female American holly cultivar is the Maryland Dwarf (also called the Maryland Spreader). Not a "tree" in the typical sense, the plant is considered to be the best dwarf form of American holly. The holly slowly forms a very wide mound in its habit, and only begrudgingly grows taller than 3’ in height. The holly was introduced in 1942 by Earle Dilatush of Bunting Nursery in New Jersey. Sometimes described as a prostrate shrub or groundcover shrub, the Maryland Dwarf has only modest red fruit production. A typical specimen will be about 2’ tall and 10’ wide after ten years. The tree makes a wonderful (and interesting) foundational shrub.

*Spotlight cultivars have been ranked on a scale of 1-5 for top holly attributes by Boyd Nursery Company nurserymen (5 being the best). Ranked attributes include leaf color (degree of dark green), luster, and trainability of central a leader. 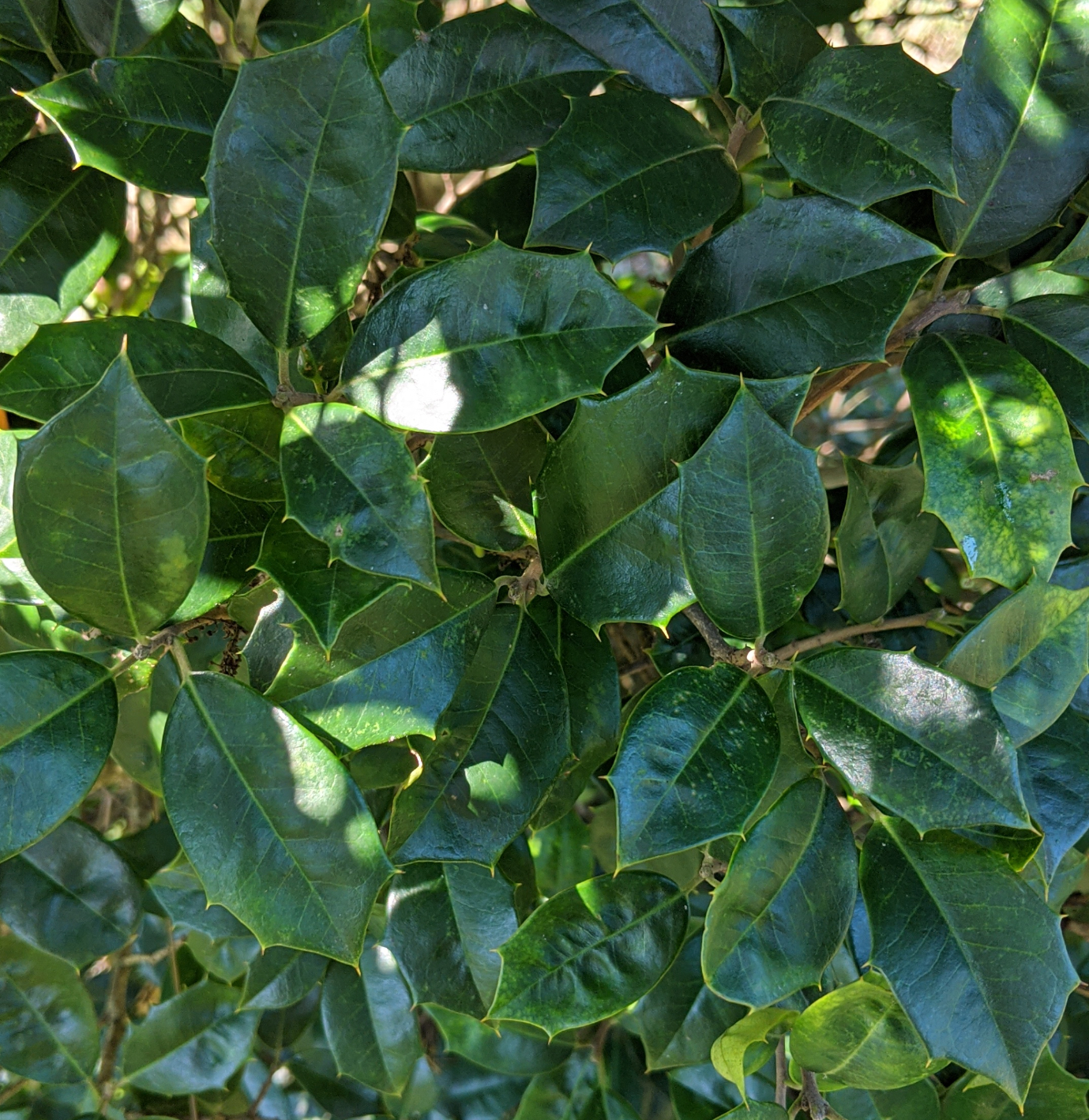 There is not a single male American holly cultivar more popular or well-known than the Jersey Knight. Introduced by Dr. Elwin Orton of Rutgers University who registered the tree in 1965, the tree was marketed as the gender companion of the Jersey Princess. The holly was one of the first trees released with the Rutgers New Jersey Agricultural Experiment Station during the 1970s. Since that point, the Jersey Knight has become much more than the companion to a single cultivar. The tree has lustrous dark green leaves and handsome form. It was discovered at the New Jersey home of Judge Thomas Brown in 1945 and at maturity can grow up to 30’ tall. Its typical adult size is 7-8’ tall with a 3-4’ spread over ten years.

The easiest way to identify a male holly from a female holly is to look for berries. If you see berries, your job is done. Because all hollies are dioecious (either male or female), any holly sporting berries during the winter, will be female. The only exception to this rule is the Croonenburg Holly, which is allegedly monoecious (both male and female). In the event that berries are not present, the only scientific way to confirm a holly’s sex is by studying its flowers. Flowers are only borne in late Spring, typically in May. All hollies bear flowers with four petals. The difference can be seen by examining the center of the flowers. Male flowers will have a structure of four yellow stamens extending from the flower’s center; whereas, female flowers will have a green nodule (ovary) at the flower’s center. 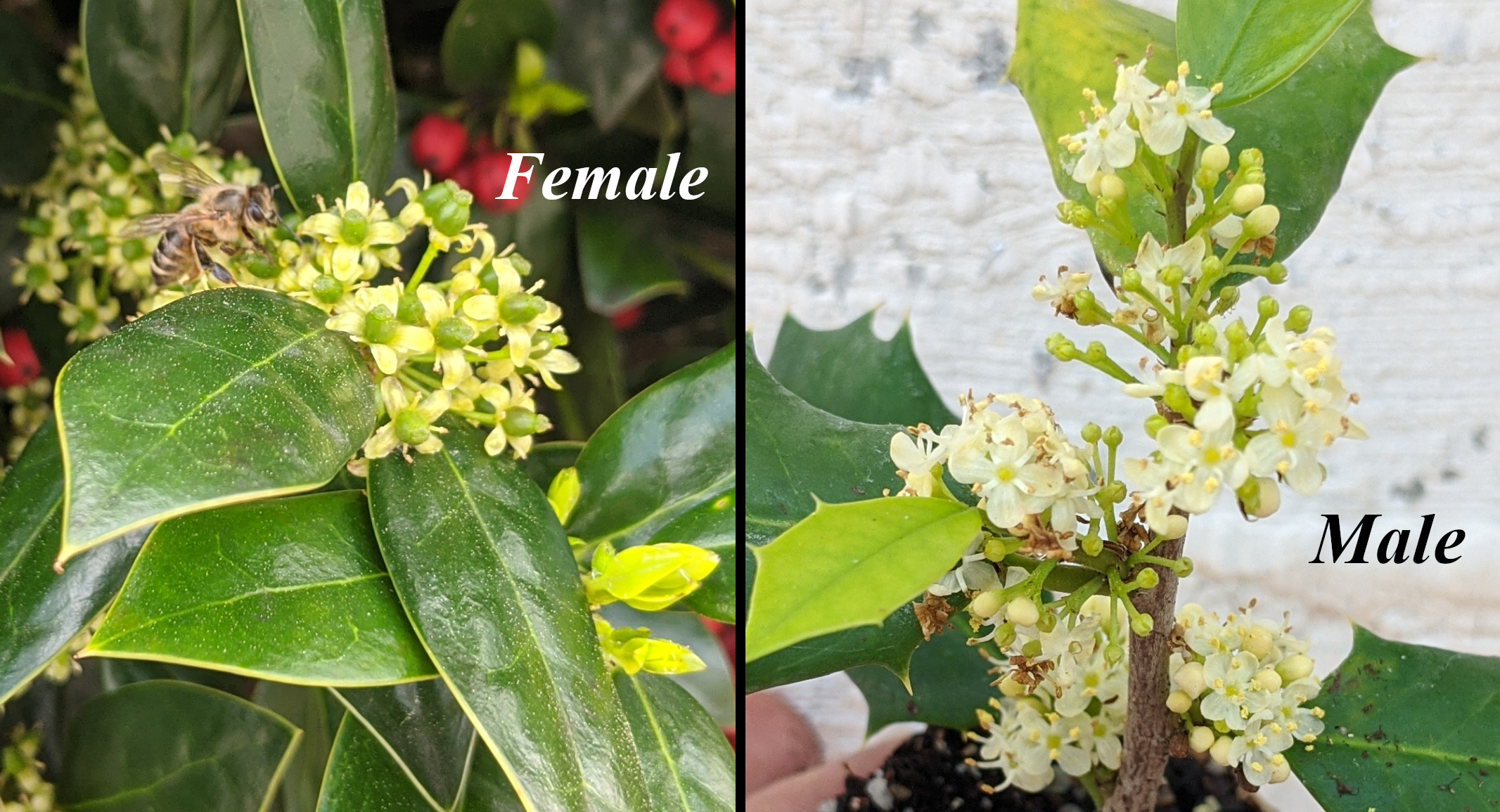 Where can I purchase American Hollies?

We offer American Hollies in several rooted cutting packages, including the female cultivars Jersey Princess, Miss Courtney, Morgan Gold, and Satyr Hill. We also offer the male cultivar Jersey Knight. All cultivars that we sell are asexually propagated. When your order is received, plants are collected as soon as the weather permits. This time-frame is normally within one week. We monitor national weather conditions and temperatures for shipments. If at any time your order must be delayed for weather concerns, we will advise you by phone. For a quote on larger quantities, please call or email us. We ship via Priority Mail from zip-code 37378 and DO NOT ship plants west of the Rocky Mountains.
We also have balled and burlapped American Hollies available. Cultivars include Jersey Princess, Miss Courtney, Morgan Gold, and Saytr Hill. Size and quantity availability can be found at boydnursery.net.

This product may be shipped year round!